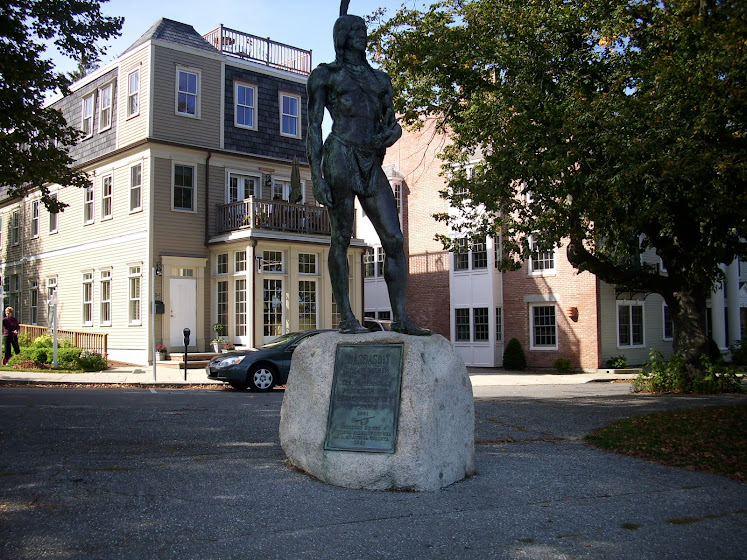 Yes this is a graveyard rabbit blog, but I just had to talk about the show last night.  Who Do Think You Are part 2 with Emmitt Smith was wonderful.  Emmitt appeared so candid and open; it was very moving.  Also educational as I didn't know about the segregated marriage record books.  I really enjoyed the episode and can't wait for next week.

This tombstone was found in an old neglected cemetery located on the Otis Wilder Farm on Short Shun Pike June 26, 2000, southwest of Nicholasville, Jessamine county, Kentucky.


My husband Gene and I visited Nicholasville, Kentucky in 2000 to attend the 1st Annual History Fest. It was our first time there, even though I had been researching his family for 25 years. The Ernspiger/Arnspiger family had moved to this area in 1792.
Years ago, the cemetery had been surveyed by Howard Teater, a local historian, and designated the Grow Cemetery based on the three or four stones visible.


Jessamine county is a beautiful, rural area of the Blue Grass country of Kentucky. The Arnspiger's settled in the German area known as Chattersville on the east and west forks of Jessamine creek. During our visit there was a scheduled tour of what was fondly called "Abraham Houser's Mill". This was the original mill structure built in 1800 or so by pioneer Abraham Houser Sr. Land owned by the Arnspiger family in the early 1800's was just down the creek from the Mill. It is important to understand a little about the cemeteries and the Arnspigers. The family lived in this area for about 75 years. Howard Teater, the local cemetery expert had published three books of cemetery surveys, containing over 40,000 names. There was not ONE Arnspiger name in any of those books. My question had always been, "Where are they?". So when we had the opportunity to explore a cemetery that was on land that had actually belonged to this family, we jumped at the chance.
We followed our guide, Bill, out to the road and then around the bend and over the creek, turning into nothing more than a path, which lead past a large, old dilapidated house up to a barn. From there we all went in Bill's truck through a hayfield to a stand of trees. There was the old cemetery, completely overgrown with large trees, high grass and numerous vines. 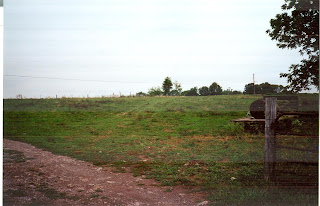 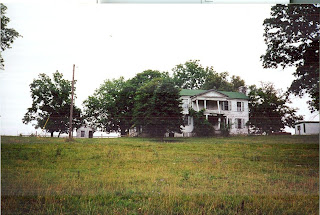 The three of us, Bill, Gene and myself started looking around. There were numerous field stones and obvious headstone but most were unreadable. We found two large well preserved stones for two Grow girls and a small double stone that was for twins, also Grow's. Then Gene found one that was from a different type of stone, more white, not granite like the others, and with some legible letters, the most prominent being a "P" and then what he thought was a "U". He called me over and we tried to make out more but couldn't really. I took a couple pictures, but didn't really think it was what we were looking for. We explored around a little longer and then decided we should try and hook up with the tour again. Bill took us to where the Moravian cemetery was but we didn't see any of the group so we proceeded to the Wilmore Christian Church. This Church had been moved from it's original site by the Moravian cemetery to Wilmore, a small village a little west.  Supposedly original timber from the Moravian church was used in the building of this new church. Others say the whole church was moved. It's a small white church, very picturesque. When we pulled in there was no sign of the tour. I asked a lady working in the church yard if a group had been by and she said no, she hadn't heard anything about it. We talked a few minutes and were getting ready to leave when, yes you guessed it, the group arrived. After the tour guide, Ken, explained our mission she was more than happy to open the Church for us. As we walked in the feeling was amazing. Here our ancestors of two, three even four generations ago had worshipped. In the front of the church behind the alter, hung a beautiful picture of Christ. Gene and I sat in the front pew. At this point Gene related a story to me. He remembers this from when he was about seven or eight years old. His father had his own ideas of worshipping God. He did not feel that one had to go to a building to worship. He felt an individual worshipped by the way he lived his life. Eugene was having some plaster work done on the home they had recently purchased about a month or so ago. He became involved in a debate of sorts with the plasterer regarding his views of worship. Finally the plasterer said ok, if you're right then ask God to give you a sign. Eugene agreed. That night he did ask God for a sign. The next morning, the doorbell rang. When Eugene answered it, it was the real estate agent who had sold him the house over a month ago. She was bringing a housewarming gift. The gift was a picture of Christ. To Eugene, it was his sign from God. This picture hung in Eugene Arnspiger's home until his death. His mother still has the picture. The picture that Eugene received is the exact picture hanging in the church in Wilmore, Kentucky in the church of his ancestors… We saw this church and picture not more than one hour after Gene and I had looked at the old headstone. 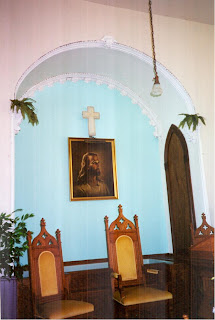 Those letters on that headstone kept pulling at Gene. We made arrangements to meet Howard Teater on Monday at the Historical Society to follow up some other leads. As I mentioned before Howard is the acknowledged expert on the cemeteries in Jessamine county. We felt if we could get Howard to go with us to this old cemetery perhaps we could solve this mystery. All day Sunday that stone kept pulling at Gene. He was convinced that what we had seen was P? U?. Could it really be Paul? Is it possible that two west coast city slickers could waltz into Jessamine county and find the gravestone of their pioneer ancestor who had been dead for 178 years?? We had to get back and look again and take some of the tools to help read the stone.

On Monday, we spoke with Howard and he agreed to go out to the cemetery again on Tuesday. Monday night it started raining, really coming down. It rained through the night and was still raining the following morning. The rain continued as we got to Howard's house. Bill, our previous guide wanted to come along again to see what else we could find. We drove to Bill's and then on to the farm. With the rain, it had made the fields wet and the hay slippery so driving up that now mud and hayslicked path was an adventure in itself.  About the time we reached the farm and the path, the rain stopped. I thought at the time, thank you, now we would be able to explore around the cemetery without getting soaked. We agreed to go in Bill's truck because he had better traction up the mud path.


When we arrived at the old cemetery Gene took us directly to the stone. Howard started his magic with shaving cream and a trowel. That helped to highlight the top letters. They were "P and "E". Then Gene started working using baby powder we had brought, and then brushing it off. Howard said "Okay, there's a date, looks like 22, I jumped and sqweaked "22", I know Paul died in 1822." As we worked and brushed the stone it became clearer it read: P.E. died July 18, 1822. WE HAD FOUND THE HEADSTONE OF GENE'S 4TH GT GRANDFATHER, PAUL ERNSPIGER, or Arnspiger as we now spell it. The feelings that went through me are indescribable. The awe, the fulfillment of a twenty-five year dream, the absolute amazement that this could possibly be. What are the chances of this? This was and continues to be a once in a lifetime moment.

We continued to look through the cemetery. I took numerous pictures and then some more. After an hour or so, we realized Howard and Bill were getting restless. We all packed back into the truck and started back through the hayfield. As we got to Howard's car, guess what…. it started to rain, again, hard.

We went back to Howard's home and visited briefly and then, thanking him profusely, said good-bye. As we talked about this the rest of the day, we realized the unbelievable number of events and coincidence that occurred for us to have actually found this stone were incomprehensible. We have decided that seven men, Eugene Steeves, Eugene Nettles, George William, (GW), Gabriel, Michael and Paul led us to that site. They gave us the signs and clues to find the gravesite of a man who had been forgotten for 123 years at the very least. To know and stand on the same ground they had stood on, and pay homage to a true pioneer, Paul Ernspiger; Revolutionary War soldier, husband and father will always be the highlight of my genealogy journey. As Gene and I stood over that grave, I thought, Michael Arnspiger and his wife and children, as well as his mother Mary Bruner Arnspiger and his brothers, all stood on this same ground 178 years ago. Now they are all sitting on a cloud high in the heavens looking down at us.

This day and time were so amazing to both Gene and I, we didn't want to let it go.  We had planned on leaving Jessamine county the next day and doing some other siteseeing... But we couldn't.  We had to go back to that cemetery.  We got permission to go back ourselves the next day.  We spent five or six hours there on Wednesday and found one other gravestone, right next to the P.E. stone.  This stone read J. Arnspiger.  It was 2/3 buried in the weeds and dirt, almost fallen into the three foot groundhog hole next to it. To me, as the genealogist who needs as much proof as possible, this was the icing on the cake.  Initials on a gravestone are not conclusive, even though in my gut I knew, logically, there was room for doubt. But with a marker in the same row, right next to P.E. with Arnspiger, I was sure, absolutely sure, we had found Paul Ernspiger.

There are no words that will convey to those reading this, the emotional experience of standing in that wild, overgrown cemetery looking at the headstone of Paul, a man I have been searching for, for twenty-five years. A man I feel l know. A man I have grown to love and respect as my own ancestor.
Posted by Jo at 12:34 PM 4 comments:

I have become a blogging groupie. This is my second blog and it is dedicated to all my ancestors in all those forgotten cemeteries across our beautiful country. I will be showcasing the cemetery information I have about my ancestors but I also hope to use this blog as a repository for the numerous cemeteries located in the Yavapai county area of Arizona. We are not quite the high country but we are certainly not the desert. I have googled for information about cemeteries in this area of Arizona and have not found much. I hope I can help to supplement the resources for those searching for their pioneer families here in the mile high country of Arizona.
Posted by Jo at 11:26 AM 1 comment:

Jo
Transitional Genealogist with a passion for "putting meat on the bones" in my genealogy research.